A LEADING international law firm based in the United Kingdom (UK) and the United States (US) has joined the legal team representing incarcerated Citizens Coalition for Change (CCC) member of parliament Job Sikhala.

The development emerged Monday as party leader Nelson Chamisa was refused entry at Chikurubi Maximum Prison in Harare were he wanted to visit Sikhala, fellow CCC legislator Obey Sithole and a dozen other party activists.

All 14 have been in remand prison, denied bail, for more than a month after being arrested for allegedly inciting the violence with rocked memorial services and a funeral wake for slain CCC activist Moreblessing Ali.

Amsterdam & Partners, the international law firm joining the Sikhala case, says they are committed “to holding states accountable for violating the human rights of their citizens and residents.”

Its founding partner, Canadian Robert Amsterdam, is described as a crusader for the world’s “highest profile human rights cases”.

Big name international clients include Mikhail Khodorkovsky, one of Russia’s famous ex-political prisoner who is now a leading opposition figure and philanthropist. 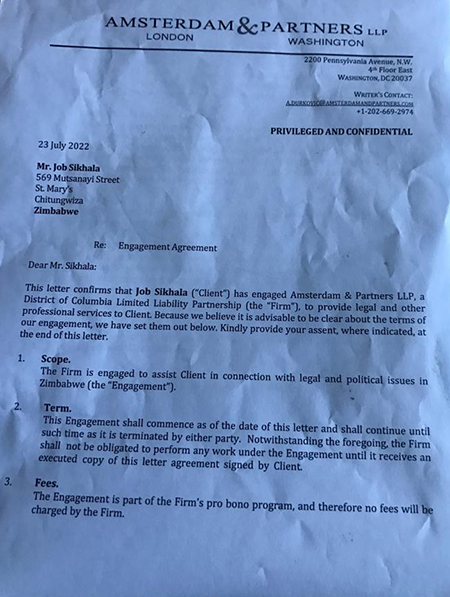 Amsterdam & Partners has some Zimbabwe experience as well, having successfully represented a United Nations (UN) representative who was sacked by the world body for his whistleblowing role over the country’s deadly 2008 cholera outbreak which claimed more than 4,000 lives.

A letter seen by NewZimbabwe.com written by the law firm’s managing partner Andrew J. Durkovich, confirms Sikhala will now get assistance for free.

“This letter confirms that Job Sikhala (client) has engaged Amsterdam & Partners LLP, a district of Columbia Limited Liability Partnership (the firm), to provide legal and other professional services to the client,” reads the document.

“The firm is engaged to assist the client in connection with legal and political issues in Zimbabwe.

“This engagement shall commence as of the date of this letter and shall continue until such time as it is terminated by either party.

“The engagement is part of the firm’s pro bono program, and therefore no fees will be charged by the firm.” 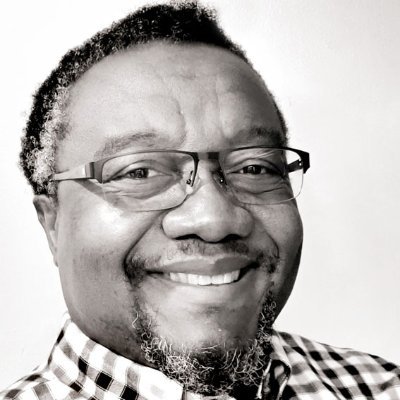 In 2013, the firm won the American Lawyer Global Pro Bono Award for successfully representing Dr Georges Tadonki, the former head of the UN Office for the Coordination of Humanitarian Affairs (OCHA) in Zimbabwe who was wrongfully dismissed by his superiors for exposing a cover-up of the country’s cholera epidemic.

The epidemic resulted in about 100,000 reported cases and some 4,200 people losing their lives.

Months before the outbreak, Dr Tandoki claimed he warned his superiors that the outbreak might affect as many as 30,000 people, however, the then country director, Agostinho Zacarias, forced him to “put the figure very low.”

Tadonki, who was in a purely humanitarian position, had a tense relationship with Zacarias, who had to balance support for both humanitarian work and the Zimbabwean government.

Along with Tadonki, opposition figures and some NGO officials questioned Zacarias’ relationship with the Mugabe administration, and claim that Zacarias downplayed the epidemic in order to remain friendly with Mugabe.

The Mugabe government failed to recognize the presence of cholera until December of 2008, four months after the first cases appeared.

In January of 2009, Tadonki was fired from his post at the UN and claims that the move was in retaliation for sounding the alarm about the cholera outbreak.

In 2013, the United Nations Dispute Tribunal, among other findings, ruled that “humanitarian considerations played only second fiddle to political issues.”

Meanwhile, the opposition CCC party has condemned the continued detention of the legislators and party activists.

“What is extremely concerning for us, is that three of the 14 who were arrested had actually had their homes burnt,” party spokesperson Fadzai Mahere told a South African broadcaster.

“Instead of the perpetrators of that arson being arrested, they are the ones being dragged to court. Two of them are just lorry drivers who were caught in the crossfire of this crackdown by the regime against opposition as if it’s a crime to be CCC and our organisation has been banned.”

Creating an Effective and Powerful USP for Your Law Firm

What Are the Signs of Elder Abuse and Neglect?