The Home Office’s claims that Rwanda is a safe country have been branded ‘irrational’ by the claimants. 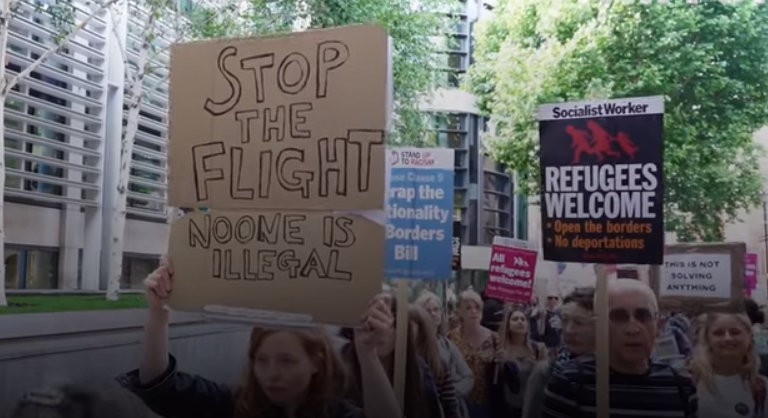 As Priti Patel resigns as home secretary and Suella Braverman steps into the job, a legal challenge against the government’s controversial plans to deport refugees to Rwanda has been brought to the High Court by the Public and Commercial Services (PCS) Union, Care4Calais, Detention Action, and several asylum seekers.

The highly contentious policy has seen the British government invest £120 million in Rwanda in trade for off-loading people arriving to the UK by small boats or in the back of lorries to seek asylum.

Threat of inhumane treatment and torture

The groups challenging the government claim the policy is illegal and puts the human rights of individuals being sent to the East African state at risk.  Citing internal memos within the government highlighting human rights abuses in Rwanda, the claimants say the refugees being deported face the threat of inhumane treatment and torture.

The Home Office’s claims that Rwanda is a safe country have been branded “irrational” by the claimants.

Memos seen by the court in a previous hearing on the Rwanda policy include one sent to the then foreign secretary Dominic Raab in March 2021, in which officials from the Foreign Office warned that if Rwanda was chosen for the deportation policy “we would need to be prepared to constrain UK positions on Rwanda’s human rights record, and to absorb resulting criticism from UK Parliament and NGOs.”

A separate official memo that was shown to the court revealed how Foreign Office officials had advised the government against engagement with several countries, including Rwanda.

The court was also informed of how the UK High Commissioner to Rwanda had previously indicated that the East African nation should not be an option for the policy as it has been “accused of recruiting refugees to conduct armed operations in neighbouring countries.”

Another memo from April this year described the fraud risk as “very high” and there being “limited evidence about whether these proposals will be a sufficient deterrent for those seeking to enter the UK illegally.”

Leading the case against the government is the PCS Union, which represents employees of the Home Office, and described the policy as “not only immoral and unlawful” but “unworkable too.”

Mark Serwotka, general secretary of PCS, said: “We want the Home Office to abandon its hostile approach to refugees and to work with us to build a humane system that allows our members the time, space and resources to do their jobs properly.”

Sentiment shared by Bella Sankey, director of Detention Action, who commented: “The British courts have a fine tradition of guaranteeing fundamental rights and holding the executive to account when it overreaches.

“We believe that the government’s policy of expelling traumatised torture and trafficking survivors to an autocratic country thousands of miles away is unlawful, immoral, and counterproductive.

“We are going to court today to test the lawfulness of the policy on behalf of our clients and hundreds of others liable to forced expulsion.”

The debut flight to Rwanda was due to leave on July 14 but was grounded after an eleventh-hour intervention from European human rights judges.

The legal challenge in the High Court began on Monday and is expected to run for five days. A second hearing brought by Asylum Aid, which provides legal representation to vulnerable people seeking asylum in the UK, is due to take place in October.

The legal challenge against the deportation policy comes as Lord Richard Harrington, who was appointed as minister for refugees in March 2022, quit. Harrington has made no secret of his contempt of the government’s policy of sending migrants to Rwanda and repeatedly refused to endorse the policy. He said he was stepping down because his job was essentially complete.

This week has also seen Priti Patel hand in her resignation letter as home secretary. The letter celebrated the heavily criticised deportation policy, while stressing that she wants to see Truss’s new government maintain what she refers to as a “world-first” scheme.

Stepping up as the new home secretary is Suella Braverman, who is set to take an even harder line on migration than her predecessor. Pitching herself to the right of the party, Braverman is expected to move quickly to side-line the European Convention on Human Rights (ECHR), which was used to ground the attempted first flight to Rwanda.

The appointment of Braverman as home secretary comes as little surprise, as during the leadership campaign, the new prime minister Liz Truss vowed to make immigration a “top priority” and ensure the Rwanda policy will get off the ground.

A source for the Truss campaign told the Daily Mail: ‘She’s determined to see the Rwanda policy through to full implementation as well as exploring other countries where we can work on similar partnerships.”

Gabrielle Pickard-Whitehead is a contributing editor to Left Foot Forward

As you’re here, we have something to ask you. What we do here to deliver real news is more important than ever. But there’s a problem: we need readers like you to chip in to help us survive. We deliver progressive, independent media, that challenges the right’s hateful rhetoric. Together we can find the stories that get lost.

We’re not bankrolled by billionaire donors, but rely on readers chipping in whatever they can afford to protect our independence. What we do isn’t free, and we run on a shoestring. Can you help by chipping in as little as £1 a week to help us survive? Whatever you can donate, we’re so grateful – and we will ensure your money goes as far as possible to deliver hard-hitting news.

Monetary Metals Reviews, Are They a Scam or Legit?

Tips to Find a Great Attorney When Legal Problems Occur

What is the Purpose of Law Firms?

How To Find The Best Separation Lawyer